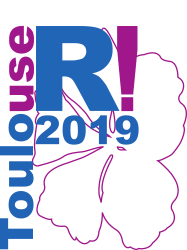 This page describes how the organization committee handled the topic of sustainability and eco-responsibility during useR! 2019, why and how decisions have been taken. The intent is to provide a comprehensive feedback to the community on this topic and to share a few learned lessons to pass to the next organizers. Some comments are my personal opinions and do not oblige the entire organization committee.

From a methodological point of view, the estimation was based on a self-declaration survey in which the city of origin, as well as the mean of transportation is collected. Based on an estimation of a bit more than 20 % of the participants, we computed partial carbon footprints for the main geographic areas using an automatic localization of the cities. First, the GPS coordinates of all cities were extracted from the GeoNames database to compute the geodesic distances of each travels. Then carbon emissions were estimated using the ADEME emissions correspondences tables available at this link. The obtained total was adjusted by geographic areas (using a post-stratification approach) to obtain a final estimate. This gives the total value of 864,406 kg eq. CO2 (25,911 for France, 214,874 for Western Europe, 51,094 for the rest of Europe, 298,777 for North America, 50,718 for Asia, 198,002 for Oceania and 25,030 for South America for, respectively, 240, 557, 70, 97, 29, 27 and 6 participants registered1). Note that this value is probably an underestimation of the true value since people tend to self-declare more easily if they are already sensitive to the topic of carbon footprint impact of transportation. In average, a useR! participant emitted 720 kg eq. CO2 for transportation, which represents 15% of his annual carbon budget according to the IPCC objectives to limit the temperature increase even further to 1.5C (see this reference).

As a very personal note, I think that it is our responsibility, as scientists, to start thinking about the impact that the organization of conferences (and more precisely our transportation to attend conferences) has on the environment. At the current time, there is no real alternative solution and I am as guilty as anyone of frequently using the plane to be able to discuss with colleagues, organizing projects, going to conferences, … In addition, note that at useR!, we did not have any concrete action to alleviate that impact. However, I believe that providing facts and figures is a first small step to start the process of thinking about actions that can truly matter.

In addition, several participants have expressed the fact that the lunches were the sources of too much waste. That is entirely true (whereas, as explained before, the impact of this problem is negligible compared to the impact of our transportation; I don’t want to say that we should not have addressed it in a better way, just that we should prioritize the two topics differently). I shortly explain the global constraints that we faced and how we tried to take responsible decisions regarding these aspects:

In conclusion, we certainly not succeeded to tackle the problem in the best possible way but that was a constant concern for us. This is also the main reason for which we provided local and perishable goodies. From our experience and what we learned, the best advice that I could give for future conferences would be to have someone dedicated to that only issue from the start. The reason is that, as an organization committee, you have already too much to think about. Sustainability is certainly not a critical point to make the conference happen: it is something that, as human beings, we think is important. The only solution to have a more effective way of handling the problem would be to have someone having only that topic in mind and supporting the others on their respective topics to take the time to investigate all solutions and find the best one.

Nathalie Vialaneix
on behalf of the organization committee